During the spring of 2011 Kev and I ventured out to discover the Natchez Trace Parkway.  It was a trip we had talked about taking for years. We set out from Atlanta heading for the northern terminus of the trace just outside of Nashville, Tennessee.  Once we were on the parkway it was a 444 mile drive which took us through part of Tennessee, a small portion of Alabama, lots of Mississippi, and ending at the southern terminus in Natchez, Mississippi.  The scenery was beautiful and especially colorful with redbud and dogwood trees, wildflowers, and azaleas blooming the further south we traveled.  I bet it’s breathtaking in the fall! 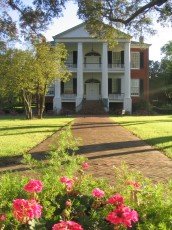 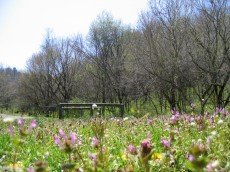 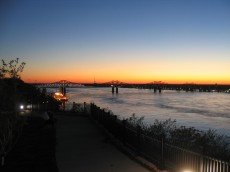 The Trace is rich with history spanning thousands of years, and there are many sites and points of interest to explore along the way. Some of the places we enjoyed were the Meriwether Lewis Monument (He died in a cabin along the trace.), several cypress swamps that were so peaceful and pretty, the sunken trace, Mount Locust, and of course, Natchez to mention a few. Vicksburg isn’t too far off the parkway and definitely worth seeing, especially if you are interested in Civil War history. There is no lodging or restaurants on the parkway, but many towns and communities just off the parkway can provide what you need. 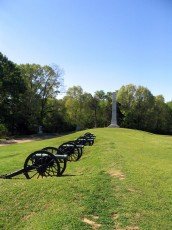 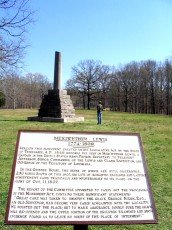 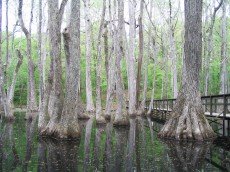 After leaving Natchez, we were on our way to stay at a very unique bed and breakfast in Hattiesburg.  It’s called Meador Homestead B&B.  You stay in a dog trot style cabin built in the late 1800s by the current owner’s great-grandfather, and it’s very authentic with hand built furniture and other furnishings.  The owner, Dean Meador-Smith is the most gracious, hospitable host you can imagine. During our stay Dean was preparing Teavine Chicken Spaghetti for a dinner party that evening and was kind enough to share the recipe.  I’ve made it several times since when we have a family crowd ‘cause it makes a very full, to the top 9”x13” casserole! Serve it with a salad, bread, and dessert, and it can easily feed 8-10 people. I’d like to share the recipe with you, and it’s also included in a cookbook Dean published herself called Ms. Sippy.  This cookbook is full of divine, mostly southern recipes. 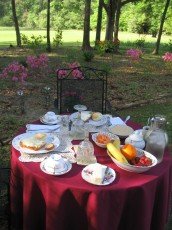 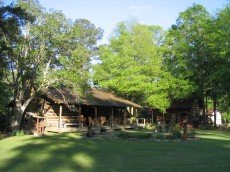 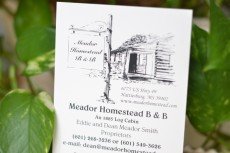 Make basic white sauce with 4 tablespoons butter and flour and cook until bubbly.  Add cream and chicken broth, stirring and cooking until thickened. Add mayonnaise, sour cream, Parmesan, lemon juice, wine, and seasonings. Sauté mushrooms in remaining 4 tablespoons of butter.  Place chicken, mushroom and chicken in a 9″x13″ casserole. Add sauce and mix well. (This part is tricky, and you may want to mix in the pan you made the sauce in if it’s large enough.) Sprinkle with paprika and more Parmesan cheese. Bake at 350 degrees for 30-40 minutes.