These sweet and salty bars were first baked by my mother when we lived in Germany in 1965.  She found the recipe in her hot off the press copy of Recipes on Parade: Desserts Edition!  Recipes on Parade were a series of cookbooks which included thousands of recipes submitted by military officers’ wives from around the world.  Hello Dollies was a recipe she baked over and over again because everyone loved them!  You may think they are just the well-known Magic Bars that so many of us have baked, but there is one important difference!  Saltine crackers! Yep, here we use crushed saltine crackers rather than graham crackers for the bottom crust layer, and it definitely changes things!  If you are a fan of the current trend of sea salt and chocolate or salted caramel, I think you’ll be a fan of Hello Dollies as well!

1 cup chopped pecans (I like my pecans toasted first)

*If using a dark coated pan lower temperature to 325 degrees, as the edges tend to get dark. 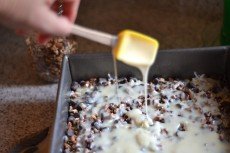 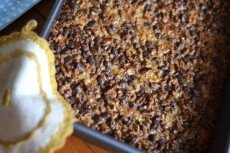 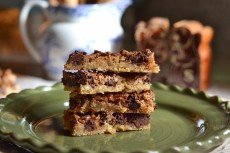